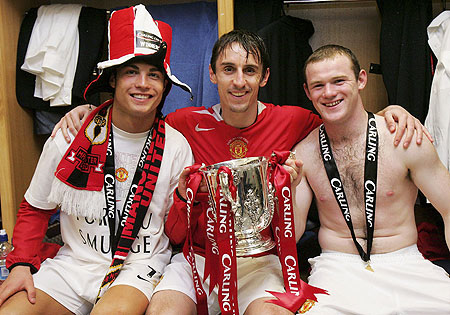 The Red Devils have celebrated winning their [INSERT NUMBER] Premier League title with a victory over [INSERT NAME].

United have been [DOMINANT / EFFERVESCENT / POWERFUL] all season, with players like [ROONEY / CHICARITO / MAME BIRAM DIOUF] weighing in with [NUMBER] of goals and [NANI / YOUNG / ANDERSON] catching the eye with [DYNAMIC / PACEY / ELEGANT] performances.  Holding everything together was the [INFLUENCE / CAPTAINCY / SEXUAL EXPLOITS] of [38 / 39 / 40 / 41] year-old Ryan Giggs.

Alex Ferguson has avoided speaking to [SKY / BBC / HIS WIFE] throughout the campaign after accusations of [HIS SON BEING A DODGY AGENT / HIS NOSE BEING THE REDDEST THING ON EARTH / MIKE PHELAN BEING AN ANDROID], but he celebrated wildly with [HIS TEAM / THE FANS / HIS HORSES] following confirmation of the title win.

The Premier League title goes along with the other [1 / 2 / 3 / 4] trophies that United have already won this season, and next week they compete in the Champions League final against [INTER / BARCELONA / ANZHI MAKHACHKALA] in [BERLIN / OSLO / TORSHAVN].